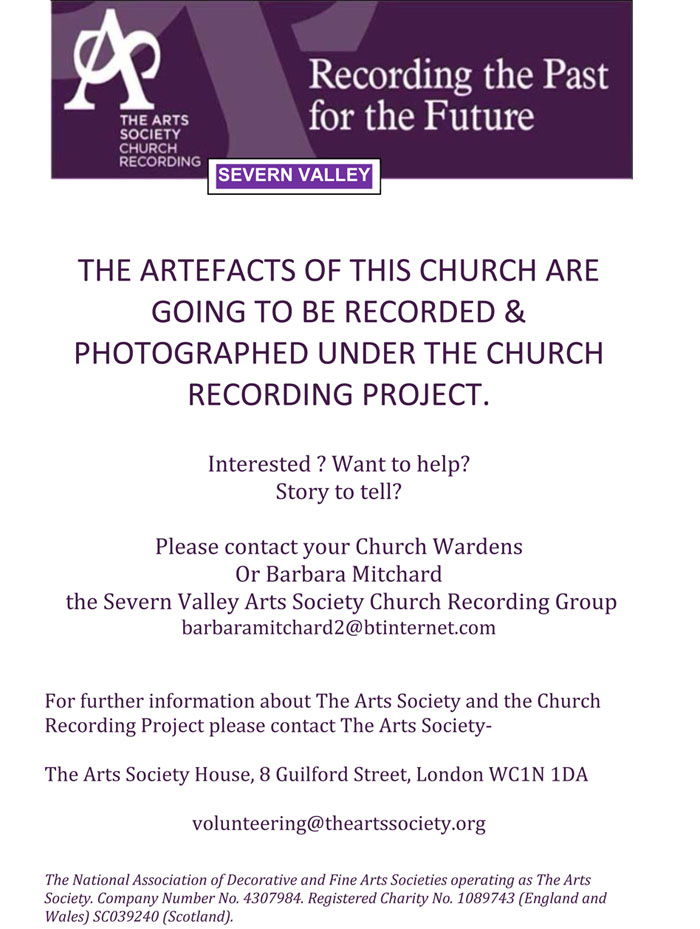 The Art Society recorders who are currently surveying the church have come up with this article from the Bath Chronicle dated August 1856.

This church, the third in the same parish which, has been restored and enlarged within the last three years and a half, was re-opened on Thursday, the 31st Many of the neighbouring families assembled, before the appointed hour, at the house of Mr. Baldwin, the Rector's churchwarden ; and thence proceeded to the church, followed by the clergy procession. Morning Prayer was read by the Rev. T. the junior curate, and the Communion Service by the rector, the Rev. J. S. .MV Anderson, and senior curate, the Rev. J. 11. J. Morison. Ah" admirable sermon was afterwards preached by the Rev. Daniel Moore, minister of Camden Church, Cain - berwell, from Isaiah xliii, 4. " Then will Igo unto the altar of God, unto God exceeding joy." At the end of the sermon, whilst the sentences of the Offertory were, read, the Churchwardens received the contributions of the people, in aid of the proceeds yet needed to defray the expenses of the work. The offerings-thus given amounted to upwards of Upon leaving the church, the visitors and most of the parishioners repaired to spacious tent, where luncheon had been provided for them by the Rector, and, before the party separated, he availed himself of the opportunity to express his deep gratitude for the help extended towards that and other works lately completed in his parish. Three churches had been restored and enlarged ; two schools and a master's house had been built; and funds had been collected towards the accomplishment of other kindred works. His vestries had granted two special rates of 2s. 6d., and one of 25., towards the three churches of Tormarton, Acton Turville, and West Littleton. That amount had been swelled by grants from the Incorporated Society for Building Churches, and yet more largely the free-will offerings of many kind friends. The Rectpr specified several of these, and acknowledged, among the most recent, one wdiich ho had received from Dr. Baring, the Bishop elect of the diocese, and another of from one of the farmers then present, his churchwarden, Mr. Baldwin. At half-past three o'clock, the church was again filled for the celebration of evening service, the Rector preached from the 2nd Lesson, Hob. iii. —fi. At the conclusion, further offerings were received ; and to these otherp have pince been added, making the total amount of contributions connected with the day's solemnities more than no insignificant proof of the hearty goodwill and sympathy with which the exertions of the Rector been supported. The restored sanctuary at West Littleton is a beautiful specimen of a village church. The works connected with it have,been carried on, were those at Torniarton and Acton Turville, Mr. \lillar, of Seagry, under the able direction of T. H. Wyatt, Esq., architect, Great Russell Street, London. The only parts remaining the original edifice are the walls of the chancel. All the rest, including the picturesque bell-turret, it was found necessary to re-construct. A new and large nave and porch and vestry-room have been built. The whole of the interior has been re-arranged, and made capable of containing more than double the former number of worshippers. A new font of Tormarton stone has been erected ; and a new service of communion plate presented for the use the church. The stained glass window at the east end is the work oft Mr, Miller, of Brewer Street, Golden Square ; and the text at the base of the windows, as well as the tables ofthe Decalogue and Creed, and Lord's Prayer, were painted Mr. Tanner, of Chippenham. We ought not to omit to say that the farmers of Tormarton kindly granted a holiday to those of their labourers who are members of the village choir, and thus enabled them to bear an effective part in the services of the day.

Webmaster's Note: It is not known yet if the apparent spelling mistakes/character omissions were present in the original document or have crept in during the scanning process.