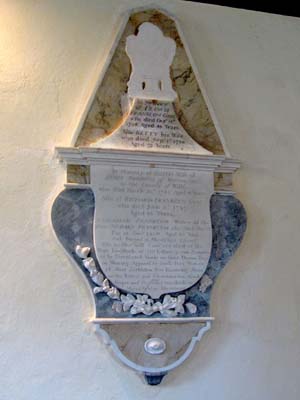 Research into the FRANKCOM family memorial provided a great deal of information on how the families described on this and the many of the other memorials in the church are linked.  The resources researched included wills and parish registers, and from these came the following details, as described below and as can be seen on the chart.
Mr Francis FRANKCOM was born abt 1700 and died 14th October 1748.  He married Elizabeth (aka Betty) who was born around 1717 and died September 1789.  Francis and Betty had five children Alice, Edith, Frances, Richard and Dorothy.   It is at this generation that many of the links with the other local families occurs.