The Osborne Family are well documented in the Wiltshire & Gloucestershire archives over many generations.  The West Littleton link is with SARAH OSBORNE who married WILLIAM HILLIER as described on the Hillier page.
On the memorial, further members of the Osborne Family are named.
Sarah Osborne was the daughter of James Osborne and his first wife Edith.  Their other children were:-

Edith OSBORNE (senior) died 30th March 1782 and is commemorated on the memorial below left.  James OSBORNE remarried Frances Frankcom, the sister of his first wife,  on 9 June 1783.    For further detail see the Frankcom family page 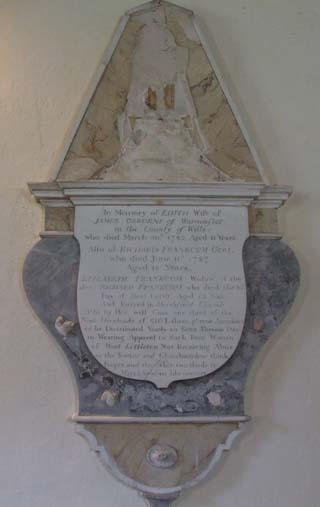 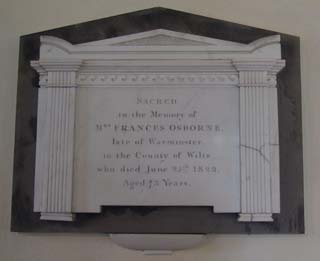 There are a number of tombs and graves in the churchyard in memorial to other members of the Osborne family.

Although the research findings to date have been limited, a will dated 10 August 1769 for a Nathaniel Osborne “of the parish of Wapley and Codrington, Gentleman” names his brother Charles Osborne “of Codrington” as his sole executor and beneficiary.  This will is dated 10 August 1769 and was proved in 11th September 1772.  However, the will was challenged and at a hearing on 2nd March 1774, the case between a Mary Osborne (describes a widow and relict of Nathaniel Osborne) and Charles Osborne (the brother) was heard and proved again and the decision went in favour of the brother Charles.

The will of Nathaniel also described his estates lying in the “parish of West Littleton”.

Further research is being completed to confirm the ancestors of Nathaniel and his brother Charles. Charles the brother was the father of William Shipp Osborne, whose details can be found below.

William Shipp Osborne of Badminton in the County of Gloucester. Gentleman    1741 – 1815
William Shipp Osborne was the son of Charles Osborne and Grace Shipp.  He married Mary Hatherall (1738 – 1820) on 10 April 1763, and they had five children (as named on their father’s will)

Tomb 8 OSBORNE Family
This tomb is predominantly for William and Ann OSBORNE and their children, although Ann is not named “in memoriam” on the tomb.

There is also an inscription to a William OSBORNE (1775 – 1861) and the exact identity of this member of the family is currently being researched
(South-right:  Sacred to the memory of William OSBORNE who died the 18th December 1861 aged 86 years)

Notes from the will of William OSBORNE
The will of William OSBORNE (of Badminton, Gentleman) was made 7th May 1819 and proved with codicil 12th November 1822.    The Codicil (1821) and will supported by affidavit by Isaac ISAAC and his wife Elizabeth Isaac, Late a Carter to William OSBORNE of Badminton, Gentleman.
The will was proved in London with codicil 12 Nov 1822.   Oath of Ann OSBORNE, widow
The Children are not named in the will.    Tomb 8 names them as follows
North-left:  Sacred to the memory of Ann daughter of William and Ann OSBORNE who died Dec 9th 1808.  Aged 6 years 6 months.  Also of Maria their daughter who died Feb 26th 1810 aged 2 years and 6 months.

East:  Sacred to the memory of Thomas eldest son of William and Ann OSBORNE who died October ? 1852 aged 48 years.  Also of William OSBORNE their son who died Feb 10 1855 aged 47 years

Thomas (1805 – 1852)
1851 census shows Thomas (age written as 47) and his wife Elizabeth (age 35) living in the village of West Littleton.  Thomas is described as a Gentleman.  Also in the household at the time of the census was Francis Wm Fowler the Curate of West Littleton.

1842   Baptismal records for the parish of Seagry record the baptism of Eleanor, daughter of William and Eleanor Sarah Osborne of West Littleton, on 21 August 1842

1855   The memorial above describes :
“Sacred to the memory of William Osborne of this parish who died February 10th 1855 aged 47 years”
Further research has revealed that William’s death was investigated by the Coroner and the verdict was : “Accidentally killed by a fall from his Horse”.  His occupation at the time of his death was a Farmer.

1861   The census describes Eleanor now a widow, living at West Littleton as a Farmer of 136 Acres
and that she was born in Seagry, Wiltshire.  Her children living with her at the time of the
census are Eleanor (18,  William (17), Henry (16) and Ann (14) all recorded as born at West Littleton.    Also with the family at the time of this census Mary Bayliffe described as sister to Eleanor and unmarried aged 48.

1881  This census describes  Eleanor aged 63 as head of household a Farmer of 135 acres employing 5 labourers, living at Farm House West Littleton with her son Henry (36) and daughter Mary (31).  Also in the household at this time are Marian Watson Osborne described as a visitor (married aged 26 born Ireland and a Clergymans wife); also William Rasu  Osborne grandson to Eleanor who was only a few months old and born Longridge Lancashire.

1891   and 1901 census describes Eleanor living at Manor Farm, West Littleton with her son William.  In 1891 Mary Osborne her daughter is also listed, and in 1901 Lucy M Hitchcock (24) granddaughter of Eleanor is also recorded as in the household at the time of the census. 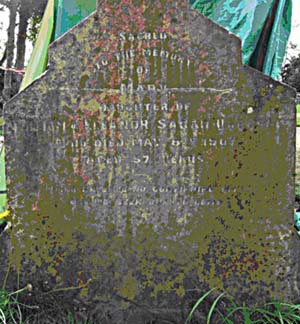