The Shellard Family of West Littleton

The Shellard family name can be found in a number of parishes in Gloucestershire, Wiltshire and Somerset.  The three memorials at West Littleton are for a family living in the parish, many of them for all their lives.

William Shellard married Ann Ettell on 29th April 1841 in the Parish Church of Batheaston Somerset, by licence.
William was the son of Edward Shellard a Farmer and Ann Ettell the daughter of Jonathan Ettell a Market Gardener.

1841   The 1841 census (taken 6 June 1841) shows William and Ann living in West Littleton and describes William as a Farmer born in the county of Gloucestershire and Ann not born of the county as she was born in Somerset.

1851   The census describes the family living in village of West Littleton
William is described as born in Dyrham  and his wife Ann born Batheaston
William is also described as a farmer of 206 acres.  Their daughters are also listed on the
census Jane (10), Mary (8), Ann (6), Elizabeth and Matilda both aged 2.

1871   The memorial (above) records the death of Ann Shellard on 22nd December aged 25 years, daughter of William and Ann Shellard

1891   The census details Jane living with her sister Elizabeth Cowley and her brother in law Charles and their family at The White Hart Inn, The Folly, Cold Ashton.
Charles Cowley is described as an Inn Keeper and Farmer.

1901   The census details Jane still with her sister Elizabeth Cowley and her brother in law Charles and their family at The White Hart Inn, The Folly, Cold Ashton.
Charles Cowley is described as a Farmer (Grazier).

1911   The census details Jane still with her sister Elizabeth Cowley who is now widowed.  The four Cowley children are living at home and working the farm.  They are now living at Tolldown Inn Farm Dyrham.

1927    Jane Shellard died on 30th January 1927 aged 84, at Tolldown, Dyrham and is described on the death certificate as the “Spinster daughter of William Shellard (deceased) Farmer.”.  The informant was A.C.Cowley her nephew, who was probably Arthur Charles Cowley, as named on various census. 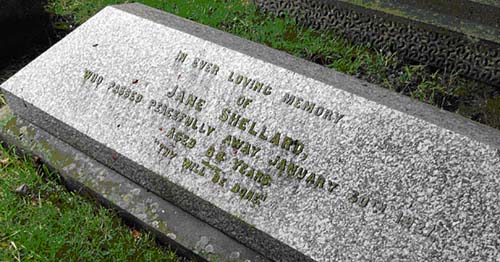