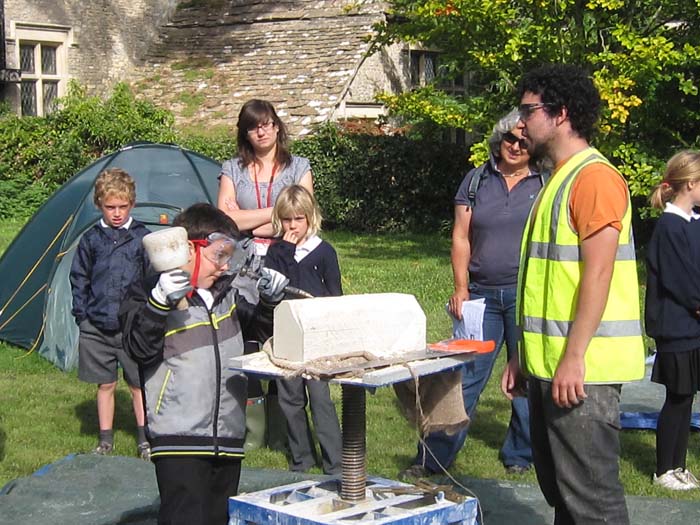 Some seriously difficult work being undertaken on the wall memorials and some serious concentration from Marshfield School pupils as one of their classmates carves stone! 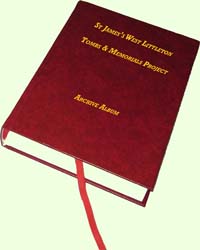 The archive album for the project may be downloaded here. It will take a few minutes to download so please be patient.

In September 2008 we embarked on a project to restore the important collection of 18th and 19th century wall memorials and tombs. There are four marble memorials inside the church and nine listed chest tombs in the churchyard that were in urgent need of conservation.

The project to conserve this vital heritage completed in September 2011 and cost £46,500.  We were delighted to have been awarded a grant of over£13,000 from the Heritage Lottery Fund (www.hlf.org.uk) and £15,000 from the Ibstock Cory Environmental Trust as well as other grants from various trusts and other organisations. The Gloucestershire Historic Churches Trust and the Marshfield and District Local History Society were also supporters of the project.

The conservation work started in July 2010 and took around three months to complete. One of the objectives of the work was to alter the appearance of the tombs and memorials as little as possible.

Marshfield School have taken an active part in this project using it as the basis for a research project for the school – around 130 pupils aged between 7 and 11 were involved.

We have also secured the help of Ann Ballard a local genealogist, who is helping to research information about the families of those commemorated by the memorials and tombs that were conserved. This work is still continuing.

The project has a dedicated web site at http://www.stjamesmonuments.org which has recorded the progress of the work in some detail and is providing a resource which is being used by others considering similar undertakings. It is intended that the website shall be maintained and updated for the next 10 years.

If you would like to help with our research or in some other way, please contact David Adams 01225 891100 or Alan Young 01225 891383 or email the project team at info@stjamesmonuments.org